“I’m afraid. What if the power goes out and the A/C stops working?” I said to the older woman in the hair salon as I patted my freshly blown-out hair with my left hand while my right stroked my eight months pregnant belly.

“What?” she asked, scrunching up her face. “Why are you worried about that now?”

Oh, I knew why I was worried. I was worried the baby, the tiny newborn, would overheat. And she kept scrunching her face at me. At that moment, it hit that “normal” folk didn’t think like I did. Pregnant ladies went about their days never thinking about lack of air conditioning and its effects on a newborn. My baby was due in July, one of the hottest, most dense, months in New York City; no trees near my apartment for breeze or oxygen; my baby could possibly die from this.

“Okay, yes you’re right. Thank you,” I sighed in relief. That was one worry that I could now pack away. There was a solution for it. I envisioned my husband renting a car and driving us to safety, or packing up my baby in his carrier on the Amtrak to Massachusetts to my dad’s. In that hair salon I could see, as a bubble above my head, the possible safety scenes playing out.

I have a friend from graduate school who suffered from postpartum depression. She received medication for it from her gynecologist at a follow-up visit after the birth of her first child. I was newly engaged at the time and not thinking about kids. All I had heard was “baby blues.” Feeling sad, crying, unable to connect to the child. Brooke Shields and depression after the birth of a child. That was my scope of understanding. That was postpartum depression I had to look out for, according to one of my gynecologists, at one of my last visits prior to my son’s birth, a birth which was not as I had planned or anticipated, a pretty traumatic experience due to the way I had been treated by my doctors. Did that contribute to what followed? Severe, paralyzing worry, inability to sleep, feeling as if my heart was running up to my throat, nausea, skin rash on my chest I still don’t know why or from what, and the inability to feel my son was safe. In danger from forces out of my control, and control was all I was trying to gain. I wanted to do everything to protect him, keep him safe, but felt that was not in my power, no matter what.

I worried about how to hold him without dropping him, how to interact with him, how to make sure he knew how loved he was, how to bond, how to bathe him, how to properly care for his vulnerable body, how to how to how to…. A neighbor saw me getting the mail and commented how tired I looked, that I needed to sleep when the baby slept. Oh no, I had to stay awake to make sure he was still breathing, had to place my hand over his chest as he slept in his co-sleeper right next to me. When my husband rented cars, I had to sit right next to our son, my hand under his chin to prevent his head from falling forward in his infant car seat so he wouldn’t stop breathing, or fail to get enough oxygen. I constantly felt his neck to check for overheating. I blasted my husband on the street because he didn’t tighten the harness straps properly and if we crashed our son could slip out and die.

That was my anxiety. The fear of losing my child dented its way into my daily life and thoughts, and forced me to be hyper-vigilant. And when the SIDS period was heightened, so were my worries so that I slept a total of three hours a day, and not consecutively, screamed at my husband any time I felt he wasn’t doing anything, even changing a diaper, properly, and screamed curse words violently at my father when he came to visit because I felt he was making too much noise when baby was napping. We lived next to a hospital. Baby didn’t care about noise, and living next to one didn’t assure me of any fears.

I did not have deep depression. I had zero depression. I was filled with gratitude and awe and anxiety. Until years later while reading an article that showed up in my Facebook feed, I didn’t even know postpartum anxiety could exist. I even had a very pricey postpartum doula for a few hours who said, “You’re not depressed.” I was okay, but wasn’t. I had no women, or family women, to connect with. I had one friend to email.

My husband, still in the early days in his newish job, worked very long hours. My New York City gal pals didn’t come by; and they had no experience with children either. I felt so anxious, so desperate, so misunderstood, that I decided it was just my son and me. I was staying home with him, and we bonded. There was no one else. Did he somehow know his mom was suffering? He was pure love. That love saved me. We’ve heard that expression before, of course. I had felt that if I could feel such love, I could do anything, riding the worries until one was exhausted and another was picked up.

When I was pregnant, I had all the normal worries. I had cried quite often out of both fear and joy, but pulled myself back together again, reminding myself the odds were in my favor. The seeds were planted. At 30 weeks pregnant I began writing to my child, detailing how I was feeling.

After his birth, I began writing to him more, whenever I had the energy, and when I didn’t, I’d think about the experiences I had had or that we had together, and looked forward to documenting them. I documented his milestones of smiling, sitting up, crawling, all of them as well as my love for him and anything else, mildly mentioning how such love does come with some worry, but that we’d through it. I was positive. Once I had finished writing, so much anxiety was lifted and hope came thorough that small-windowed New York City apartment. And what was amazing was that anywhere fears surfaced I could just write through them, even if that meant jotting down notes in a small journal I took everywhere, then transferring them to the document. Writing to my son made the present moment feel present and real versus focusing on the what-ifs and fears.

I thought how one day, on one of his birthdays, I’d give him the document I started while pregnant. These thoughts appeared in that bubble above my head—or so I imagined. I was solidifying his presence and existence in the world outside of us. And so I wrote. And still I write. 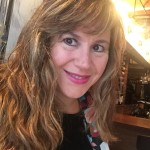 M.J. Golias currently lives in Connecticut with her husband and two children. After graduating from the University of Memphis with an MFA in poetry, she moved to New York City where she taught English as a second language. She had poems published in numerous journals, one anthology, and had one Pushcart Prize nomination. She now stays at home with her children, amazed at their imaginations. And after she thinks they are asleep, she writes.

A Therapist’s Story (Part IV): How I Turned My Pain into my Counseling Pr...
Scroll to top