Last weekend, I enjoyed a rare occurrence. My son Joey, who is almost 4, and I were home alone. With siblings and a daddy it had been approximately 9 months since this had happened. Joey was knocked out from a long day and early morning (3:45 a.m., sigh). He pathetically whimpered his way into the house and I picked him up and put him in my lap. I placed his head on my chest and held him close. He fell asleep almost immediately.

Having Joey on my lap all cuddled up brought me back to when Joey was little. The body remembers. When Joey was tiny, I always held him. If there was a word stronger than always I would use it. If I was awake and home, he was in my arms for pretty much the first 6 months of his life. My mom once suggested that I put Joey in his crib after he had fallen asleep in my arms. This recommendation would seem reasonable to most people. I looked at her as if she had 2 heads or had offered to take Joey to get a tattoo, and flatly refused.

Now don’t get me wrong, holding your baby is great. It is good for both of you. I very much like holding babies. They are warm and cuddly and smell good. The issue was my motivation for holding Joey.

For me, holding Joey was a compulsive behavior to alleviate the obsessive fear I had that Joey and I would not attach. Through my training as a therapist, working with adopted kids and their families, I know a lot about attachment. My knowledge “planted” this fear that started before Joey was even born. I found my only solace in holding him nonstop during my waking hours. I would hold Joey as if our lives depended on it. My arms would ache, my legs would cramp, my bladder would be full and I. Would. Not. Move. I also did not allow anyone (including my husband) to hold him for more than a very short period of time.

So back to that recent weekend with Joey on my lap. As we sat together, I noticed that our breathing patterns were exactly the same. I paid close attention to our “in and out” and questioned if I was manufacturing this symmetry, but it was legit. A definition of attunement that I found and liked noted “a feeling of being ‘at one’ with another being.” As Joey and I sat together and breathed in complete unison, I indeed felt “at one” with my sweet firstborn.

Several days after this event, I was driving home from work and once again reflecting on how special that experience was. I could tell that I was turning a corner. Suddenly a thought came across my mind that was so strong, I burst into tears. I had to pull over, as I was all blubbery and blurry-eyed. The thought was that Joey and I really are attached. We are attuned to each other. The intensity of my response is a testament to the intensity of my fear that this would not happen. We survived, we made it through, and we love each other very much.

Whatever darkness you are currently facing, I promise you—it will end and you too will survive. Keep fighting the good fight. It is a worthy battle.

I am a wife 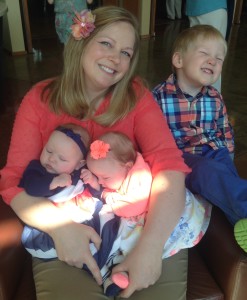 , a mommy, and a licensed clinical social worker (LCSW). With Joey, who is now 4, my symptoms punched me in the face within days of his birth. With the girls, (Emily and Holly—identical twins who are 1), I had symptoms worthy of two babies for my entire perinatal period which is considered conception through first year of life.

At this time of life, I spend 87% of my non-working time caring for the small people who live in our home. We go to work to relax. Someday, when I am not quite so in demand, I will once again have meaningful conversations with my husband, wear makeup regularly, shop, read something longer than a Facebook post, and go out to eat.