These days my brain is often fried, overstimulated, sometimes underwhelmed, overworked, and unsupported for the tasks I ask it to do every day. But I think they have keyed the term #thisismotherhood for that. I wouldn’t say I disagree. I would say that I think mothers who suffer from postpartum depression, anxiety, or mood disorders have a different kind of wall to climb on this journey called motherhood.

I started this pregnancy off like my other two pregnancies. Well… no, I can’t say that exactly. During this pregnancy, everything was completely different. I was separated from my husband at the time, and we were discussing getting a divorce, getting back together, getting even, and all sorts of other things couples do when one spouse decides to leave a “happy home.” I was with someone else, and we ended up getting pregnant. We wanted a baby; I didn’t expect it to happen so quickly.

I have an autoimmune antibody which can cause a heart block in the infant, early on in pregnancy. This heart block can cause a miscarriage, and later on, during pregnancy can require surgery for the infant or early delivery. Often the infant is fine once it is born. I discovered this antibody between my first and second children. For my second child, however, the prenatal specialist said… “Well everything looks fine; I wouldn’t worry about it and the chances of anything bad happening decreases with each consecutive pregnancy.”  So, I figured, okay, baby three… I got this.

I decided it would be best to stay on my antidepressants during this pregnancy; I suffered perinatal and postpartum depression with my first two pregnancies before. I generally suffer from depression with intrusive thoughts and anxiety for a year or so postpartum, and it sometimes creeps up during the pregnancy too. Being pregnant again, I knew who I was without medication, and I didn’t want to be that person. That person has zero tolerance for loud noises, her patience is less than wore thin, and she hates everyone and everything, even the beautiful smiling faces of her awesome kids.

Due to this antibody from my immune disorder, I have to be closely monitored through my entire pregnancy. Monthly lab work, weekly scans, bi-weekly non-stress tests. It is labor intensive. But all in all, I understand the purpose, I want to keep my baby safe. It was at our big scan at 18 weeks that I was looking at the ultrasound with the tech at a larger, more fancy hospital than the one in my hometown when I noticed that my baby did not quite look like my other two. Now I am no radiologist, but I do have a medical background so I can tell what is up and what is down with an ultrasound. The specialist came in and talked about the heart; after all, that is what we’re supposed to be concerned about. Then she too noticed the difference. “Oh,” she says, “I wasn’t expecting that.” Which, of course, can ignite anxiety in any parent. She then goes on the explain how my baby has a cleft lip.

A cleft lip is when the lip muscles do not fully fuse, leaving a gap under the nose down to the mouth. A cleft can be one-sided, both sides, it can extend up through the nose, and can even affect the palate. What I didn’t realize was that this was still a thing, what do I mean by this? I was under the impression that if I did everything right then, cleft lips were only a third world problem due to lack of nutrients and so on. I know that sounds like a very uneducated excuse for my shock, but it was the truth. And even though I was told over and over, this is congenital, and there was nothing I could have done, I still assumed it was my fault. Why? Because that is how your brain works when you have perinatal depression, your mind tells you all sorts of things that aren’t true. It makes you paranoid and convinces you that your husband or significant other is cheating on you, it assures you that you are getting too fat, so you don’t eat for long periods, it convinces you that bad things will happen because you’re not good enough to be carrying this baby.

So, every time we went back in for a scan, and someone told me, “oh, did you know that your baby has a cleft?” I felt that same sting of them telling me I did something wrong. I was scared that because my daughter was going to be different people would not like her. I was ashamed that she would look different from other kids and that she wasn’t going to be beautiful. These are vain things to be worried about, but I worried never the less. I also began to feel anxiety about breastfeeding. I breastfed my first two daughters, what if I couldn’t breastfeed my third? I allowed myself to grieve this thought of breastfeeding and had convinced myself that I would not be able to.

I then began experiencing itching, to my hands and feet. The most intense itching I have ever felt in my life. I couldn’t explain it. I started Googling reasons why a pregnant woman would have itchy hands and feet, and I came across cholestasis of pregnancy. A nice little condition where your body stores up bile acids and makes you itch, among other things. But there is a high risk to the baby if the bile levels get too high. Mine was higher than the cutoff number, so this meant that I needed to be induced four weeks before my due date to a baby I had no idea how to care for.

Induction day came and went, and on the Fourth of July I had my beautiful baby girl, and I mean beautiful. Her cleft lip was the most gorgeous cleft lip I have ever seen, and I’m not just saying this because she is my baby. She is pretty adorable. However, that high only lasted for a couple of days. I was alone in a hospital with a brand-new baby for three days before I could go home. She was nursing well, to my surprise. Her breastfeeding was the only thing that kept me going at first.

Each time I would take her out into public, I flinched, what if someone said something negative? What if people look at her like she’s a monster? These thoughts flooded my mind regularly; I was terrified to take her out in fear that someone would say something about her appearance, and my emotions could not handle this right now. I was not ready to tackle negative comments. I was scared for her and the way she looked; I would walk through the grocery store with the car seat cover pulled down so that people couldn’t see her. If people asked to look at her, I would tell them she was sleeping and walk, no run, away. As each day passed my anxiety decreased until we would go to a new place, and then I had to learn how to be comfortable with who she was in a new setting all over again. There were days I would look at her and cry, grieve the baby she could have been without her cleft lip.

I am ashamed to say that there were also times where my postpartum depression would get the best of me, and I had no way of connecting with my baby who looked different. She would smile at me, and I would feel nothing for her. She would be brought over to me to nurse, and I would sit there staring into nothing, not able to bond with her. I felt this deep depression, so deep that I didn’t even tell my family about her cleft until after she was born. I couldn’t imagine talking to them about it and being asked how this happened, because again, this would be a reminder of something that I did wrong.

Slowly my depression shifted away from her to me, and I began to take my PPD out on myself, which I can say was a good thing. I no longer felt ashamed of my thoughts about my daughter; she is beautiful. She was brilliant from the day she was born, and I hope that someday if she ever reads this she realizes that I genuinely was never ashamed of her, these are just ugly things PPD makes you think because it doesn’t allow you to be happy and enjoy all these moments that you are never able to get back. She has since had her cleft surgery, and I miss the little lip she had before, I had to grieve the loss of that beautiful lip because I wasn’t able to see before how much I was going to miss how unique and wonderful she was and is. She is doing well, and each day, even when I hate myself, I can look at her and see a glimmer of hope that helps me to keep going. 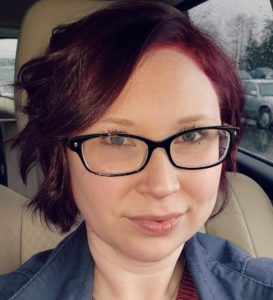 Mary Miller is a Registered Nurse with a Master’s Degree in Nursing specializing as a Family Nurse Practitioner. She is currently working on her Doctorate of Nursing Practice with an interest in postpartum depression, perinatal mood disorders, and breastfeeding.  is the mother to three wonderful and wild daughters ages 5, 3 and 1. When she’s not running around with her girls, working, or going to school she enjoys copious amounts of coffee, dancing, and being out in the sun.

Exercise was my recovery EMDR Therapy
Scroll to top