My patient Sarah* came to see me in clinic for help managing her anxiety during pregnancy. Her anxiety was largely focused on the appropriate diet and worries about the weight gain. She would look online for the nutritional value of everything she might eat, and read all the debates about what she should and shouldn’t eat during pregnancy. She carefully tracked her weight, and the week she came to see me had been difficult. At her OB appointment she learned she had gained a few more pounds than she expected. She reported a history of an eating disorder, but her symptoms had been in remission for several years.

Women with anorexia often have lower body weight and disruptions in their menstrual cycles, making conception a challenge. Those who do conceive often have more complications during pregnancy, including smaller-for-gestational-age babies, preterm delivery, higher rates of cesarean section, and lower Apgar scores. There is also the postpartum risk of depression. Those with bulimia also have higher rates of hyperemesis gravidarum (the severe nausea and vomiting of pregnancy).

There are biological, psychological, and sociological reasons for these complications. Biologically speaking, an eating disorder changes nutritional intake, which affects a baby’s development.

Psychologically, a woman with a condition such as anorexia can have significant difficulty with the loss of control related to pregnancy and delivery. Sarah described herself as a perfectionist. She wanted to make sure she had a perfect pregnancy and was a perfect mother, following all the different recommendations. Perfection is impossible, and the stress of trying to achieve it is a huge burden! Sarah was struggling quite a bit trying to manage that burden, which left her feeling overwhelmed.

Sociologically, those with lower relationship satisfaction or less social support have a higher risk of developing symptoms of an eating disorder, whether bulimia or binge-eating or a combination. Sarah noted a good marriage, but she had not shared her eating history with her husband, and so she felt quite alone.

I spoke with Sarah about the risk of an eating disorder recurring during pregnancy. For many women who have an active eating disorder, the symptoms can improve during pregnancy, often because a woman is able to think about the health of the baby which becomes her primary motivator. However, those with a history of disordered eating can be quite triggered by pregnancy. In part, this may be because the disorder was not first and foremost in a woman’s mind at the start of pregnancy, and the fears about weight gain and body image can come up quite unexpectedly.

I also spoke with Sarah about the high risk of symptom recurrence postpartum. While pregnant, a woman can sometimes be motivated by her baby, but the postpartum period is often a challenge. There is a higher risk of postpartum depression and anxiety. There is an expectation for rapid weight loss. Sleep-deprivation and adjustments to new parenthood are added stressors.

Sarah decided to resume psychotherapy with a clinician trained in managing disordered eating. She also agreed to work with a dietitian who specializes in working with people with eating disorders. And she agreed to let her obstetrician know about her struggles, which is important as it might dictate an adjustment in monitoring. The team-based approach is essential for the treatment of disordered eating during pregnancy and postpartum, with the goal of supporting mother and baby. 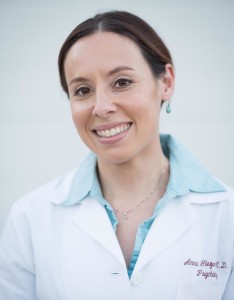 About Dr. Glezer:
Dr. Anna Glezer is a Harvard-trained clinician with current joint appointments in the reproductive psychiatry and OB/GYN departments at UCSF Medical Center. She is the founder of Mind Body Pregnancy, a new online educational resource that helps women with their emotional well-being and mental health during pregnancy, delivery, and postpartum.