Ten years ago if you told me that, in a state of despair, I would beg a stranger to attach electrodes to my head to zap me, my retort would’ve been: “No way!”

Life always has a way of surprising us. My life’s biggest surprise was being diagnosed with postpartum bipolar (bipolar, peripartum onset). Six weeks postpartum, I was manic and oblivious to the inevitable crash that follows bipolar mania. When depression descended, it was vicious. I tried numerous medications, but my depression wouldn’t budge.

When my father died, my depression intensified more than I ever could’ve anticipated.

Apart from my husband, I considered my dad to be my best friend. He too had bipolar disorder, and when I called him about my diagnosis, he cried. He said, “I feel guilty for passing the genes on to you.”

Dad’s health began failing during his seventies. Each time when it seemed he reached his end, he’d make a miraculous recovery. But no matter how many remarkable recoveries Dad made, I knew someday I’d lose him forever. I dreaded each day knowing I might get The Call.

When I was told my father died, I became catatonic. My depression plummeted to depths it never reached before. I asked my husband to take me to the hospital because I was experiencing suicidal ideation.

At the hospital I told the staff I had bipolar disorder, I was medication-resistant, and I felt suicidal. I asked for ECT (electroconvulsive therapy) in which seizures are electrically induced in patients who are first given anesthesia and a muscle relaxant.

My initial association with ECT was Jack Nicholson’s character receiving it in the film One Flew Over The Cuckoo’s Nest. Nicholson’s grimace was a horrific depiction of ECT at its worst. Conversely, years prior to my bipolar diagnosis I read the poignant memoir Undercurrents—A Life beneath the Surface by psychologist Dr. Martha Manning. She fell into a depression so deep that she opted for ECT. The treatments helped her enormously. She struggled with fatigue and short-term memory loss, but Dr. Manning made it clear she made a lifesaving choice.

After I arrived at the hospital, to say I felt desperate for ECT was a massive understatement. I remembered Dr. Manning’s book. Without any hesitation I told the psychiatrist on duty, “I want to do ECT!” I admitted myself to the hospital as an inpatient.

I was informed of ECT’s risks by the hospital staff, but I was already aware of them. My father had ECT done in the 1980s at U.C.L.A.’s Neuropsychiatric Institute. While ECT didn’t help him, neither did it affect his memory or cause other adverse side effects.

The psychiatrist explained that I would have unilateral rather than bilateral ECT. This meant that electrodes used to stimulate my brain would be placed on one side of my head instead of both sides. This was the conservative approach (which is usually good when dealing with a brain!) and meant fewer side effects, most notably less memory loss.

The treatments started at 6:00 a.m. in the unit allocated for outpatient procedures. “B”, a kind hospital aide, took me to the unit. If I had to be escorted to ECT by anyone, he had the perfect kind of personality for the job. After B dropped me off in a small, curtained room, I was prepped by a friendly nurse who immediately noted how down I was. She did her best to set me at ease and started the IV line that would be used to inject me with anesthesia. I never had a problem with injections, luckily, so that didn’t faze me one bit.

I was looking forward to oblivion.

At 6:10 a.m. in walked the psychiatrist Dr. C, accompanied by a handsome anesthesiologist. (Although I was in the pit of depression, I was able to notice beauty!) Dr. C gently placed several electrodes on my scalp and temples. A small, clear gas mask was placed over my nose and I remember finally being able to relax.

At that point, I wasn’t scared. The tangible compassion I could feel from the staff around me went a long way to lessen my anxiety.

The anesthesiologist said, “Okay, Dyane. I want you to count backwards from 10.” When I reached 5, boom! I was fast asleep. I didn’t feel a thing. There was no pain during or after the ECT.

When I woke up within the hour, I was groggy, but I was completely coherent in about ten minutes. I had an appetite and ate breakfast. Significantly, my short-term memory loss was minimal. While I was still heartbroken over the loss of my father, I definitely felt better than I did before the first treatment. With each additional treatment there was improvement in mood.

After a week, I was discharged and had my remaining treatments as an outpatient. My husband dealt with logistics, which were an enormous stress. He was self-employed and we were extremely lucky in that respect, but we didn’t have relatives or friends who could help us during my outpatient procedures. It was very tough on my family. I had to arrange long-term payments with the hospital because my health insurance barely covered anything, but it was worth it.

I was incredibly fortunate with the outcome. I’ve heard horror stories of those who didn’t have my kind of experience. However, I’d do it again in a heartbeat.

Last year I found a deeply inspiring TED talk given by Dr. Sherwin Nuland about his ECT experience. Dr. Nuland’s talk is considered to be one of the most popular TED talks ever given. If you’re remotely considering ECT, Dr. Nuland will make you laugh, he’ll make you think, and he’ll give you hope. Here is the link: https://www.youtube.com/watch?v=oEZrAGdZ1i8

ECT removed my suicidal ideation and helped me get back on my feet, but I still needed to find medications that would continue to lift my treatment-resistant depression. ECT didn’t make everything better, not by a long shot. But it enabled me to get on a proactive path of recovery. I can unequivocally state that doing ECT was the best decision I ever made. 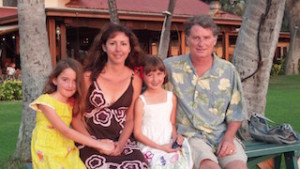 Dyane Leshin-Harwood holds a B.A. in English Literature from the University of California at Santa Cruz. A freelance writer for over two decades, she has interviewed luminaries including Madeleine L’Engle, Dr. Kay Redfield Jamison, and SARK. Dyane was diagnosed with postpartum bipolar disorder (bipolar, peripartum onset) in 2007. Dyane was selected as an International Bipolar Foundation Story of Hope and Recovery, and a PsychCentral Mental Health Hero. She’s raising her daughters Avonlea and Marilla with her husband Craig and serves as a women’s postpartum mental health advocate. Dyane founded the Santa Cruz, California chapter of the Depression and Bipolar Support Alliance (DBSA) and facilitates free support groups for moms with mood disorders. She’s a member of the International Society for Bipolar Disorders and Postpartum Support International. Dyane’s memoir Birth of a New Brain – Healing from Postpartum Bipolar Disorder will be published by Post Hill Press in 2017. Dyane is a Huffington Post blogger. Her own blog Birth of a New Brain is at: www.proudlybipolar.wordpress.com and Twitter: @birthofnewbrain