De repente me sentí sola. And just like that, I felt lonely. Desperately so.

Weeks after having my beloved, olive-skinned bebe, I was back to doing what a mom does. I was busy with my other hija, my toddler of two and half. I made it to a mama-baby yoga class once or twice, where I had met a neighbor with a daughter the same age. I was able to strap her onto my front in the baby carrier, her little bottom placed on a rolled-up washcloth and her legs curled in front of her against my chest.

What I had not resolved was that sentimiento, that constant feeling of being lonely. I remembered that years earlier a neighbor had told me that being the mother to young children was very lonely. Back then, in my high heels and involved in my youthful pursuits of love and lust, I nodded in agreement, “Claro que sí!” pretending to empathize as I let everything she said to me slip over my baby-free existence and flutter off into the wind.

Now todo era diferente. My high heels were the furthest thing from my mind, likely stuffed somewhere in my closet in a bag of clothes, along with my self-confidence, all of which I hoped might still fit one day. I certainly couldn’t have cared less about attracting anyone in a sexual way, but what about friends? In my throat, I could still locate the voice that I needed to ask for food and water, for hot coffee or for a tiny diaper to sweetly place on the clean and dry bum of my newborn, but the voice that I used to ask for help, help laughing, help smiling, help enjoying a sunbreak on a rainy day? That voice was locked away inside.

Sometime in the middle of the night, when la chiquita estaba con hambre, muy hambrienta and ready to nurse, that was when my voice seemed ready to burst forth. I wanted to call on all of my amigas and pay for some magical travel package that would transport them through the phone or e-mail, over the borders and the muchos kilometros right into my room. We could sit and talk right through the chill of the morning and as the birds stirred in their nests among the rhododendrons outside my windows. We could make boiling hot cortados and nibble on flaky media lunas while our babies slept soundly in our laps. It was in those darkest hours that my fantasy and hunger for friendship were both the strongest and the least likely to be satisfied. Somehow, later in the pale light of mornings alone, with Liliana at preschool and Darius at his lab, the key to that voice, those desires, went missing entirely.

I would pick up the baby, cuddle her, feed her, clean her, and feed her again. Put her down for a nap and think about taking one myself. Often I would receive text messages and phone calls, even e-mails from Caitlin, Moran, Mariana, and Carol, the very people I’d dreamt of in those lonely hours. As soon as I put down the phone or put away my computer, I would feel empty again but I couldn’t figure out how to tell anyone.

I need you. I need more of you. I am so lonely.

It is a burden to feel like a burden.

That is when I started to print pictures out at the drug store. A photo here, a photo there. Like a high school collage on a cheap piece of poster board. Scotch tape, the little Amazon notes that people had sent along with baby gifts, holiday cards with the signatures of las mejores. I filled those posters up to the edges with pictures of my friends. And vision boards! With different colored crayons for writing. La chiquita didn’t care that I was using her art supplies, and so what if she did?

What was I missing? What did I crave? Chocolate? My old waistline? Ay, a bailar! To dance with my hands outstretched? Que belleza! Estar con amigas! To be with my friends: new friends, old friends, con mi madre, mi tia! Those vision boards, of friends and palabras, the very words that I could not seem to find, as I trekked through the social desert of being the mom of a recien nacido, those homemade posters taped up on my closet door and over the baby’s changing table, they weren’t pretty or fancy. They saved me from my loneliness.

I don’t believe that salvation is a one-time thing. Finding help requires asking for it, a skill with which I had little practice. I have spent most of my life practicing doing everything on my own. Todo.

In the beginning of my new role as the mother of two the solitude was so great that I wanted to scream, gritar como una loca, but I couldn’t. So I made markers, like Hansel and Gretel, and left them all over my life. Big posters and little notes to myself about las amigas, about alegria: everything that made me happy.

I have followed those markers and continue to do that, now four years later. They keep working for me. I keep working for me. Now that I know I can summon what I want this way, even when my voice is too strained to speak, I also know that I can make it through to the next phase of this journey. It’s constantly changing and de repente, la vida esta lleno de amor.

Suddenly, life is full of love. 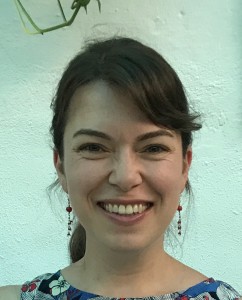 Leah Klass is the mother of two girls and has hosted multiple exchange students. Originally from the Washington, D.C. area, Leah has lived in South America, Germany, Australia, and Spain thanks to her adventurous pursuit of learning and also as an Army wife. Her professional background is in international business and public relations. She is a poet, a community organizer, a friendly neighbor, and believes in connecting people and resources.

A Therapist’s Story (Part IV): How I Turned My Pain into my Counseling Pr...We Need to Talk About Postpartum Bipolar Disorder
Scroll to top