A blog by Dr Andrew Mayers 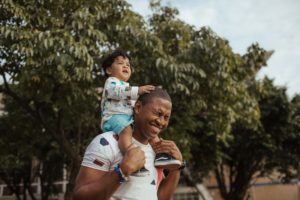 As we mark another International Fathers Mental Health Day, it’s a good time to reflect on what we have achieved since June 2018 but also reinforce what still needs to be done. I have been working in perinatal mental health for 16 years. Until relatively recently, that work mostly focused on mothers. Around 5 years ago, I also started work with fathers – not because we need to support dads instead of mums, but as well as. Poor perinatal mental health impacts the entire family; mums, dads and the children.

As a Principal Academic at Bournemouth University, my work focuses on mental health and especially how that relates to the perinatal period. In addition to teaching, I undertake research that explores a wide range of important factors in perinatal mental health. Beyond that, I am involved with many (national) mental health campaigns where I aim to influence key policy makers to improve services and provide more support. I am also a father of 4 (now adult) children and have 6 grandchildren. 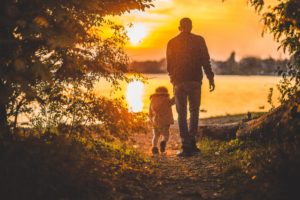 Fathers’ mental health matters for many reasons and we need to understand more about how we can help dads. My recent research sought to explore that in more depth. I focused on three areas: what information and support do fathers need to help their wife/partner should experience poor mental health in the perinatal period; what support do we need to give to fathers to deal with their own mental health in the perinatal period; and what information and support do we need to give to a father should his wife/partner experience what might be a traumatic birth. I am in the process of submitting those outcomes for publication, so I need to be careful about how much I can reveal yet. However, I can say that one theme that was the same across all 3 studies was that fathers were saying that health professionals did not regard them as part of the birthing experience; they were simply bystanders, whose feeling and other needs were not important enough. We must change that.

We also know that enduring poor mental health can mean that the relationship between the father and his baby can be deeply affected. A strong bond is needed between an infant and both parents to ensure a healthy development for that child. We need to provide more support for fathers’ mental health and to enhance the relationship with their infant. 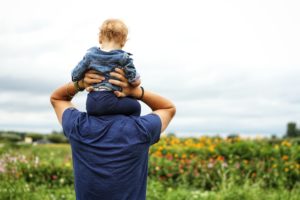 What we’ve been doing

Much of the campaigning I have done for fathers’ mental health has been in partnership with my great friend Mark Williams. It was Mark who created International Fathers Mental Health Day (IFMHD) in 2016 with Dr Daniel Singley (USA). From last year, I joined Mark as co-lead for the UK. Mark has also been instrumental in helping me design and implement the recent research projects that I have undertaken. Since IFMHD 2018, we have seen some key changes on NHS policy towards fathers’ mental health. In September, we were asked to provide data to NHS England about the most crucial changes we felt were needed to better support fathers. Along with other campaigners, researchers, support groups and charities, we sent evidence that did that.

In January 2019, the UK Government announced the NHS Long-Term Plan. Within that, for the first time, proposals were included to support fathers’ mental health. This is yet another indication that the campaigns are beginning to get noticed; at least in England. Both Mark and I were included on an expert reference group that will help NHS England develop what those proposals should look like. As you might imagine, we have some very strong views on what is needed!

Of course, we are encouraged by these successes. But is enough? Let’s put what we have achieved into perspective. Fathers will now be screened if their wife or partner has been referred to (NHS) perinatal mental health services. That’s more than we ever had before. But we do need more? Only those mothers who are most acutely unwell will be referred to those services. There are many, many, more mums who might be considered less severe who do not meet the referral criteria. Despite that, they are still suffering, as are their families. So, what happens to the dads then? They go under the radar for help, just as the mothers often do. Any new services must also focus on third sector and charity peer support groups and other such organisations. Every area must have a local hub, drawing on local knowledge and expertise.

Another factor missing from the current proposals is that fathers can develop perinatal mental health problems independently of their wife/partner. A localised hub of experts in perinatal mental health would also be able to identify these at-risk dads. Furthermore, much of the focus on fathers’ mental health has been on how dads can develop symptoms that are similar to what we see in postnatal depression with mothers. There is evidence to support that, but fathers can experience other difficulties too.

Some fathers can experience ‘perinatal OCD’, especially if they have a previous history of OCD (Obsessive Compulsive Disorder). Contrary to public myths and stigma, OCD is about deeply distressing experiences of intrusive thoughts that need to be counteracted by time consuming actions. For fathers with perinatal OCD, those thoughts focus (disproportionately) on the safety of their child to the extent that it takes over their lives. This is not good for the father or the child.

We know that some mothers can experience significant birth trauma, which occasionally could threaten her life or wellbeing and/or that of her new baby. Fathers could witness this. Currently, there is little support for fathers and partners. Witnessing such events could lead to the development of post-traumatic stress disorder (PTSD). It is very likely that this potentially damaging mental illness Is not being picked up by health professionals. We must stop this, as men are at much greater risk of suicide when they show PTSD symptoms.

In short, while we are pleased with the developments from NHS England, there is much more that still needs to be done. And that’s just England. Those new proposals do not cover the rest of the UK! That needs to change too. See now, why we’re campaigning? 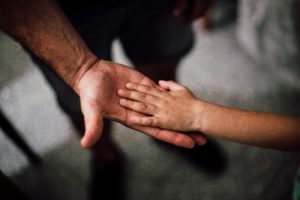 How can we identify fathers who may need help?

One of the arguments we are often faced with, especially from health professionals and NHS commissioners, is that it is hard to identify at-risk fathers who are no longer under the attention of health services. This most likely because they have returned to work (and those symptoms of poor mental health can be delayed for several months after a baby has been born). My response is that we need to do more to reach fathers in the workplace. We could take services there and we can educate employers to be more vigilant to symptoms that might be developing. I have the honour of working alongside a new-start company (Peppy Health), who are encouraging employers to invest in perinatal support services (for mothers and fathers) that Peppy can commission. It’s models like this that we need to develop to reach more families.

What we can look out for in dads if we’re concerned?

While we campaign for better services, we still need to be vigilant towards fathers to make sure that they are OK. Here’s a few tips about what we can do to look out for dads.

If you are concerned about any of these, talk to him. Encourage him to talk more – or suggest that he talks to someone. If you re close enough, suggest that you go with him to ask for help. If you are concerned that he may be thinking about suicide, never be afraid to ask that question. All too often, if we feel someone is so troubled that they might be at risk, we don’t want to ask the question in case we put that thought in their head. That’s not the case. The thought is likely to be there. We just need to get that in the open, so we can talk about reasons for living and for seeking help.

Always remember that (in the UK and Ireland) the Samaritans are available 24 hours a day, every day of the year, of 116 123. That’s a free number that will not even appear on the caller’s phone bill.

What we can do to make a difference?

I have some resources on my website, including a list of the few support groups that we currently have. You can also find my social media accounts there – so you could sue those to add weight to our campaigns. We can make a difference. If it was not for the attention we have got through radio, TV, newspapers, online media and social media, we would not have got as far as we have. But we can do more with your help.

You can read more about my work at www.andrewmayers.info (where there are pages dedicated to fathers’ mental health).  You can also follow me on Twitter (@DrAndyMayers), Instagram (@drandymayers) and LinkedIn (Andrew Mayers)