The One Thing I Needed in Order to Let Go of My OCD
by Chelsea Elker
November 21, 2017

This blog previously appeared in The Mighty and Chelsea’s blog, Delicate Change

My OCD.
My mental illness.
My disorder.
My greatest enemy.
My constant companion.

How could I let go of the thoughts? They were dangerous, out of control.

I needed to control them. And I needed to continue having them in order to make sure my kids were okay. At first, I almost had the thoughts knowingly, consciously. I read blogs and find new fears. I began to develop the fears of other women I read about. The fact that bad things still gave me anxiety meant, in a twisted way, that I would be okay. If the thoughts still scared me, I wasn’t psychotic. Eventually however, I had the thoughts automatically, it was completely out of my control.

Every minute of the day was consumed with thoughts and worry. I had gone from never having a threatening thought in my life, to having them constantly…about my children.

I was scared. Terrified. Within one month I had completely forgotten my former self.

I hung onto the thoughts for a long time, or rather, I hung on to the anxiety that propelled them. For months, I felt the need to keep worrying about the thoughts. There seemed to be a moral requirement that I spend the rest of my life remembering and repaying for the thoughts. For me, thought=action. I saw no difference. If I could think it, I obviously was capable of doing it. More than that, if I could think it, I wanted to do it.

I couldn’t figure out how it was possible to have completely zero control over my thoughts. If I kept thinking about something, I must want to, there was no other answer.

Therapists told me over and over that analyzing the thoughts only furthered my illness, but I just couldn’t seem to let go of them.

To let go of OCD, I needed to know that the thoughts weren’t the real me. Until I became completely convinced that they were 100% a symptom of a disease, I believed that I couldn’t risk letting them go.

Letting them go meant letting them do what they wanted, without reaction. I had to let them say what they wanted without letting myself get beaten down by them. I needed to take my power back from them. When I thought something awful about my kids, I wanted to fight it. I wanted to fight the thought, find the cause of it, then make myself pay an emotional price for having it. But to overcome it, I had to stop.

To conquer it, you have to understand that it is all based on a lie. Anxiety lies to you, it finds threats in the mundane. OCD turns these lies into obsessions. The obsessiveness is exhausting. The exhaustion eats away at rationality. The sadness it causes dims the soul.

So, you may be asking, how does someone let their OCD go?

I understand that “setting it free” sounds simple, but feels impossible. I get it. It’s like saying “dunking a basketball is simple, just jump high.” Letting go of anxiety and OCD takes dedication and determination. Some days you won’t feel strong enough. That’s okay. Other days you will feel like you can conquer the world. That’s awesome. Though emotions differ from day to day, one thing needs to stay the same: your goal.

The goal is wellness, not perfection. No one is perfect. Everyone has good and bad days. Recovery doesn’t happen overnight, but that doesn’t mean it is unachievable. The same energy that once went in to deciphering and dissecting the thoughts now needs to go into self-care and rebuilding self-esteem.

Recovery required me to start believing in myself again. I needed to believe what my friends and family were telling me. I needed to stop fearing the future and take control of my present. I needed to rediscover myself and trust in me again.

OCD and anxiety lie. The thoughts they put in my head weren’t the true “me” and they aren’t true for others who suffer either. We aren’t a collection of sinister people who are flying under the radar, putting those in our presence in danger. We are highly sensitive individuals who gave a bad thought too much power. That’s it, I promise. 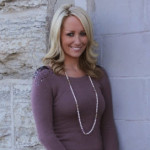 Chelsea Elker is a mother of three beautiful kids: Brayden (7), Easton (3), and Ella (1). She stays home with her kids and her husband Joel  travels for work. Chelsea’s world revolves around them and she couldn’t be any happier with her family now being “complete.” As happy and content as she is now, she was also a mom who experienced postpartum OCD, anxiety, and depression after the birth of her second son and now wants to spread hope to other moms who are still in the trenches. Chelsea has come out on the other side of this illness stronger and ready to make a difference and help others. After almost losing her voice to this illness, she has regained her strength and is ready to give others hope!