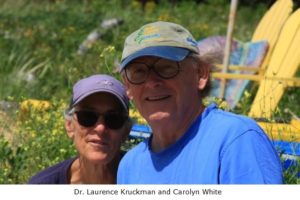 As one of the founding members of PSI and a past PSI Board member, and in your several decades of research, you’ve been a long-time contributor to the growth in awareness of postpartum mental health issues. Carolyn has also seen many changes during her career as a lactation consultant, doula, and childbirth educator. What can you tell us about the changes in awareness over time?

LARRY: When I became interested in postpartum issues in the 1970’s, I discovered less than 700 journal articles on the subject. In the late 1970’s Garland Press asked me to write a book on postpartum studies and I realized almost no research existed on prevention, nor related social and cultural variables. Further, pre-PSI, the DSM barely mentioned the problem, there was no national network of any kind re postpartum support, and there was no postpartum family leave protection for new families. PubMed now lists over 100,000 articles just in English, and over 40,000 related specifically to treatment and support. The DSM could do more but now lists PP depression as a “specifier”, and of course, due to PSI’s influence, the support movement has spread worldwide. Some US states now have paid postpartum family leave. More biochemical research has led to the first FDA approved drug, brexanalone, hopefully the beginning of new advances. Finally, technology and social media allows for more access to resources and community support for survivors and professionals. The web has played a major role in breaking down PP stigma. As a result of the internet, for better or worse, young couples have become “stigma busters”, demanding improved mental health services.

CAROLYN: In 1997, Larry and I created one of the first postpartum support websites, and this was for PSI. Around the same time, where some childbirth education classes may have integrated information on postpartum mood disorders into the curriculum, and parents could be steered to a valid site on the internet to learn more, mothers and their partners being trained to recognize problems and seek help was not the norm. These trends, and the concept of hospital related new mother support groups, have now exploded and are very commonplace, as is hospital-based lactation support, and the availability of doula support for labor and postpartum. All of these supportive services and resources for new mothers/families enhance the potential for positive experiences surrounding birth and postpartum, and increase new parent’s ability to seek and find the help they need.

Tell us about your research article “Reinventing Fatherhood” from 2000. What are some take-aways from it for today’s medical and mental health providers?

LARRY: I began studying Japanese-, French-, and English-speaking fathers in Montreal with Susanne Steinberg at McGill, as no one had researched a large population of dads during the postpartum, especially in the home. Fathers in the study group claimed over and over that they had no psychological or social “roadmap”, or role model, to follow and were individually inventing their own fatherhood, mostly alone and with much distress. This led to more public and private intervention services and has certainly demonstrated the need for more PP family support. Relatedly, I think the postpartum movement, while initially driven by “survivors”, is now more of a collaboration with professionals and researchers, many of whom are more motivated to build social services for new families.

What sparked your initial interest in parental mental health?

LARRY: In the 1970’s, returning from anthropology research in Colombia on health and social change in rural areas, I found a close friend in the throes of a serious postpartum depression. The change in my friend was so transformative that I returned to subsistence farmer research in Colombia with new interests and questions. I was intrigued by the very elaborate rituals, diet and timing of the postpartum, and found similar patterns in other non-western settings as well. To me, birth was both a biological and cultural event and I noticed that not many were examining birth or the postpartum period from that combined perspective. My friend, Mary, recovered completely, and we began collaborating on creating support groups in Chicago and Milwaukee, even creating a self help video, “A little Victory Everyday” in 1976.

CAROLYN: In the 1980’s, I worked as a nurse at Frontier Nursing Service (FNS) in Hyden, Kentucky, home of the first nurse midwifery school in the US. Surrounded by midwives and midwifery students, my interest in birth began. Larry and I met when he came to do postpartum research at FNS. He asked to accompany me on home visits to meet and talk with new mothers, and their (typically nearby) extended families. Eventually, through our relationship and my interest in his work, I was stimulated to learn more about postpartum issues. I became more involved in all aspects of birth and postpartum as a Lamaze Certified Childbirth Educator, a labor doula, an International Board Certified Lactation Consultant, and PSI State Coordinator for Pennsylvania for many years.

Your donations helped PSI take a deeper look at increasing access to learning opportunities for international providers working in their own communities. We were able to launch the Kruckman-White Postpartum Depression Prevention Award in 2018 to provide international scholarships to the PSI Conference. How does this connect with your interests?

Medical anthropology has always been linked with international public health and creative prevention and treatments: think Paul Farmer and Partners for Health. In rural non-western settings, where healthcare workers are in short supply, it is important to help educate as many folks as possible; we applaud PSI for doing so, and are happy to assist.

How is your retirement going — what are you enjoying now in your daily life?

Together, we are dedicated to environmental and historic preservation in the Driftless Area of southwestern Wisconsin, have established a “Friends Group” for our local county park, fundraise for various organizations, and have founded a community garden to name a few.