We’re at a point now where parents are beginning to talk openly about the impact of becoming parents on their mental health. Postnatal depression is often in the media, an awareness of postpartum psychosis is finally starting to build. But what if you start experiencing worries about deliberately harming your child? What if your head was filled with images of you doing just that? Where do you go from there?

I’ve experienced Obsessive Compulsive Disorder (OCD) since early childhood and, as it tends to do over the years, the nature of the condition has morphed and shape-shifted often, seamlessly changing obsessions as soon as I become skilled at managing any current ones. It has also varied in severity and intensity throughout my lifetime with whole segments being OCD free, to others where I’ve struggled desperately.

My childhood symptoms involved a lot of thoughts – obsessions – about harm coming to my loved ones and my compulsions heavily centered on the more ‘stereotypical’ behaviors associated with OCD. I counted, checked… then recounted and rechecked everything because I believed it would help keep my family safe. I spent whole evenings watching out of the window for my parents to return from work hoping this silent vigil would secure their safe return, and at my worst, it took me three to four hours to settle into bed because I was busy walking the well-trodden pathways of my night-time safety checks.

As my childhood progressed, OCD became hugely time-consuming and debilitating, but despite all this, I became an expert at hiding my symptoms and didn’t tell a soul. I feared, even back then, that talking about it would get me labelled as ‘weird’ or ‘different’ and bring unwanted negative attention on my family. This was the eighties; mental health awareness was not what it is today.

I had no idea I might have OCD until my mid-twenties when I watched a tv interview with someone who ‘got stuck’ checking their cooker before leaving the house but in true keeping with anxiety, I hoped against hope that by keeping my head down, it would all go away on its own.

Despite still having OCD, my twenties and early thirties saw me complete a degree, qualify as a teacher, move in with my boyfriend, get married and adopt a beautiful stray cat named Archer. Life was busy and productive, I was happy and content. Which is why in 2012, I gave very little thought to OCD when we decided to extend our little family and in the September of that year, I gave birth to a beautiful little boy, William.

It was at this point, the point Hollywood tells you should be the happiest time of your life, that I saw my mental health decline to crisis point.

Very soon after I’d given birth, I became anxious that harm would come to my little man or that he would die – he was so small and vulnerable. I can’t tell you the lengths I went to to keep my little boy safe. I put household objects that I deemed too toxic for the house, in the front garden. I barricaded us into our bedroom at night with chairs against the door in case my beloved cat sat on Will and suffocated him. I set alarms throughout the night so that I could wake up to check he was still breathing. As time went by both my obsessions, and their resulting compulsions, became increasingly irrational and time consuming. Eventually my life shrunk to the point where I did very little else other than sit guard over my baby.

As the weeks passed, my mental wellbeing continued to decline. I began to worry that someone ‘out there’ would deliberately hurt my baby, and sadly, as OCD loves to do, it twisted my fears so that that ‘someone’ became me. I was tortured – that is literally the closest word I can use to describe it – with thoughts and images of me deliberately harming my son 24 hours a day, and at one point I couldn’t look at a single object in my house without experiencing intrusive thoughts about me using it to hurt him. These obsessions where bad enough, but the resulting compulsions saw me unable to be anywhere near him – I could no longer hold my baby, care for him, or even be in the same room as him. I spent my days reviewing events from my past as a way of mentally checking how likely I was to carry out my fears – a hidden, discrete compulsion.

Eventually, after days of not sleeping or eating, and after beginning to contemplate suicide as an option for securing my sons safety, I visited my GP to beg him to ‘take me away’. I didn’t know where to, and I didn’t care at that point, all I wanted was to keep my baby safe.  Thankfully he recognized my symptoms as anxiety and prescribed anti-depressants.

The following year was a concoction of relapses and medication. The thing about anxiety is that it finds gaps in reasoning and almost as soon as my GP told me that what I was experiencing was anxiety, the condition started twisting his words. ‘It might be anxiety for others, but it might not be for me… what if I actually want to hurt my little boy?

It was clear that medication alone was not enough and through my own research I self-diagnosed with OCD – I hadn’t initially thought that there was even a possibility of these upsetting intrusive thoughts being OCD because I wasn’t counting and checking physical objects as I had as a child. Once armed with a self-diagnosis, I self-referred to cognitive behavioural therapy (CBT).

In March 2014, I was introduced to an incredible psychotherapist who confirmed my diagnosis, and thankfully my experiences of motherhood began to turn a corner.

Over the next eighteen months I had cognitive behavioural therapy (CBT). CBT taught me to challenge my negative thoughts and helped me to build up my self-esteem. The nature of my obsessions, and the fact I couldn’t care for my son in the conventional sense, meant that my view of myself was at rock-bottom and I found this work central to my recovery. I needed to believe that I deserved to get better and by doing that, I could begin to accept what I’d been through. I needed to get my head around the fact that all brains produce random thoughts, and images. I’d just had a baby, it was my job to keep him safe, it makes sense that my intrusive thoughts would centre around harm coming to him. It was OCD’s strange, and completely unwelcome, way of helping me keep him safe – a parental instinct gone wild.

Alongside CBT, I had Exposure and Response Prevention – the gold standard treatment for OCD. ERP exposed me to some of my biggest fears. It saw me standing on the side of a railway track with my son in a pushchair deliberately bringing on thoughts of pushing him under a train and carrying him in my arms near the top of a car park and bring on thoughts of throwing him over. Without putting myself in these situations, and resisting the compulsion to avoid the situation, how would I ever realise that it was all just anxiety?

Social media introduced me to the online OCD community. A community made up of some of the strongest, kindest, most compassionate people you could meet. Meeting people who had similar stories to my own was life changing. I’m extremely grateful to be able to say that many of these people are now my close friends in real life.

It’s been six years since the onset of OCD in the perinatal period for me, and I have spent the years since then actively walking the higgledy-piggledy road of recovery. It has not all been plain sailing. I lost my amazing parents and my beautiful cat whilst going through therapy. I’ve also had to deal with an astonishing lack of understanding of OCD from a range of people including medical staff. I’ve had setbacks surrounding grief and my original OCD, anxiety and depression, and I’ve experienced anxiety attacks as a result of having gone through such a lot in such a short amount of time. But what did come out of this adversity was an absolute determination to get better which, in turn, propelled me into action even when things got tough.

Even though I still experience OCD, it is far more manageable now and it very rarely stops me doing anything. I now use my experiences to try to help others. I set up Taming Olivia as a platform to share my experiences and what I’ve subsequently learned from them. It employs creativity, acceptance and compassion as tools to support recovery – all things that are very important to me. I volunteer with the Maternal OCD and OCD Action charities and I share my story as much as possible in the hope that it helps lower some of the barriers I had to face for others. An awareness of real OCD is beginning to surface – it’s a very exciting time!

I’ve learnt that although that brain of mine is a wonderful thing, it has in the past got things wrong – very wrong. I thought for a long time that I would never get better, I thought I had no future. That wasn’t the case at all, and what’s more, I now know that if I can get through the tough times I’ve already experienced in life, I can get through anything. I’m really looking forward to seeing where this hard won, but very exciting, new attitude will take me.

For Part I of this series, follow this link: https://www.postpartum.net/psi-blog/perinatal-ocd-part-i/ 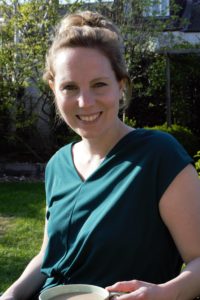 Catherine Benfield is a primary school teacher from East London and she has experienced OCD since childhood. Catherine is an OCD advocate, founder of the blog Taming Olivia, and has shared her story on international platforms such as BBC News and Women’s Health Magazine. She is a volunteer for the OCD Action and Maternal OCD charities. Catherine lives in London with her husband and son.

Featured PSI Member: Elizabeth Gillette, MSW, LCSW “If This Is So Common, Why Haven’t I Ever Heard of It?”
Scroll to top