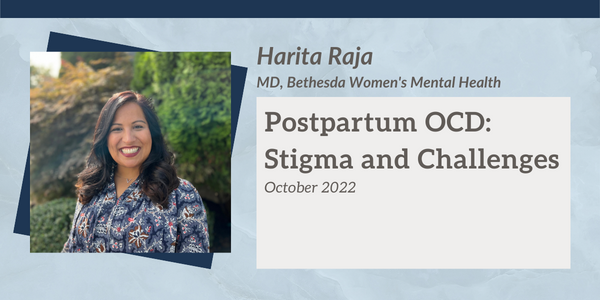 “Rosie* needs help. Something is wrong and I need to help her.” These are the first words I hear as I pick up the phone. Rosie’s husband is frantic and does not know what is wrong. He is scared. As we talk, I learn Rosie is a new mom who is six weeks postpartum. This is her first child, and she had a rather uneventful delivery. Her past psychiatric history is significant for body dysmorphic disorder and major depressive disorder. Rosie was doing well until her mother-in-law left and she had to take care of her baby herself. She began to experience consistent thoughts of inappropriately touching children, which eventually morphed into thoughts of her inappropriately touching her daughter. She had no desire or intent to do this, and the thoughts were very distressing to Rosie.

Rosie and her husband agreed to come into the office. At first glance, Rosie looked “normal.”  However, as she began to tell her story, the extent of her distress became evident. At first, she was skeptical as to how much she should share with me. Rosie was worried I would admit her to the inpatient psychiatric unit and separate her from her new baby. Eventually, she admitted she was having intrusive thoughts about inappropriately touching children, including her daughter, for hours each day. To make things worse, she was a teacher and was around children all day long. I had Rosie fill out the Yale-Brown Obsessive Compulsive Scale (Y-BOCS), which is the standard evaluative scale for obsessive-compulsive disorder (OCD). She scored high on the scale, showing that she was experiencing severe symptoms.

I knew that before I could do anything more, I had to help Rosie and her husband understand what was going on and what we could do about it. I explained that she had postpartum obsessive-compulsive disorder (POCD). First-time mothers have a higher rate of POCD than those who are having their second child or beyond. Also, given her previous psychiatric history, Rosie was at a greater risk of symptoms. POCD parallels the obsessive nature of body dysmorphic disorder. I expressed that I did not have a safety concern; Rosie had good insight. My goal was to keep Rosie at home.

The awareness of postpartum depression has improved significantly. We are thankful for that.  Next, we focused on postpartum psychosis, given its potential severe consequences. Postpartum anxiety, postpartum post-traumatic stress disorder (PTSD) and POCD have been less emphasized and, thus, underdiagnosed and undertreated.

Obsessions are intrusive thoughts that are recurrent and distressing. They are ego-dystonic, meaning the individual does not want these thoughts. In the postpartum period, we often see themes revolving around the baby, including causing harm to the baby, the baby dying in his/her sleep and cleanliness. The thoughts can be quite alarming for the patient and her family. This can lead to the mother keeping these thoughts to herself. Obsessions are more common than compulsions in the postpartum period. Compulsions are often associated with obsessions and include checking behaviors, avoidance and repetitive mental behaviors. The prevalence rates vary between 1.7% to 7.0% during the postpartum period. These rates vary so much due to the limited studies that are available.

Rosie was a new patient and it took several sessions for her to feel comfortable enough to tell me the details of her intrusive thoughts and her compulsions. She was having “extremely disturbing” thoughts and was constantly praying for them to go away. Thankfully, Rosie and her husband were open to medications and psychotherapy – the gold standard combination treatment for OCD. We started her on sertraline – she had been on it before and she did well on it in the past.

Rosie was still breastfeeding.  Breastfeeding is NOT a contraindication to being on psychiatric medications, as only a small percentage goes through breastmilk. This amount is insignificant in healthy babies and has no clinical significance. We quickly titrated her sertraline and started seeing some improvement. However, without therapy, we could only get so far. Given her initial shame and guilt about her thoughts, Rosie was skeptical about starting therapy. She started cognitive behavioral therapy (CBT) with me. This type of therapy is ideal for OCD and has shown significant reduction in symptoms. Together, medication and therapy led to a remission of symptoms. She was in remission for a couple of years.

Unfortunately, Rosie began to have the same symptoms after the birth of her second child. The postpartum hormonal changes were likely a trigger for her. Thankfully, she was able to adjust her treatment immediately. With medication management and further CBT, her symptoms once again improved.

If you are worried about yourself or someone else having postpartum obsessive-compulsive disorder, please reach out for help. You are not alone. You should first look for a psychiatrist who can do a complete psychiatric evaluation. Medications may help with symptoms. You can also connect with a therapist who can do cognitive behavioral therapy to further help you. Postpartum Support International can help find you these resources. If there is a safety concern, please call 911 or go to the nearest emergency room.

*All names and identifying details have been altered for the purpose of confidentiality.

Harita Raja, MD is a board certified psychiatrist who specializes in women’s mental health. She is a reproductive psychiatrist, which means that she understands the intricacies of psychiatric problems that occur before, during and after pregnancy and their treatments. She also has expertise in the hormonal changes that occur from menses to menopause. Dr. Raja founded Bethesda Women’s Mental Health to provide women with a place to obtain compassionate and knowledgeable psychiatric care. She works closely with her patients, their loved ones, and their providers to find the best treatment plan.

Dr. Raja received her medical degree from Albany Medical College in Albany, NY. She completed her psychiatry residency at Medstar Georgetown University Hospital, in Washington, DC, after serving as chief resident in her final year. Dr. Raja has published numerous articles and a book chapter about women’s mental health. She has also presented her work at national and international psychiatric meetings. She is a member of the D.C. Women’s Mental Health Consortium. Dr. Raja is dedicated to educating women and the community about women’s mental health and the options for treatment using a holistic perspective.