Fired Up about PMADs and Taking Action in Jordan 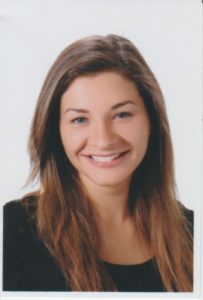 One of the events at the annual PSI conference that I especially look forward to is the new members reception. This past July in Houston, I met Mariella Suleiman, a vibrant, engaging young woman from Jordan. She had just graduated from medical school at the Hashemite University and found her way to PSI because of a sequence of events, some of which were completely by chance, that changed her life’s trajectory.

Originally from Switzerland, Mariella moved with her family to Amman, Jordan when she was twelve. Except for a few exams to qualify for residency in the States, she had just finished med school before flying to Houston for the PSI conference.

How does a young Jordanian med student end up committed not only to psychiatry as her specialty, but perinatal psychiatry? Here’s Mariella’s story.

She thinks her PSI origin story really got started during her second year of medical school when she developed disturbing physical symptoms, including heart palpitations and weight loss. She sought medical advice from more than one doctor. She heard various versions of: “Everything is fine. There is nothing wrong with you. It’s just stress.”

Time passed, and the lack of answers exacerbated what was an undiagnosed general anxiety disorder. Mariella was in a constant state of fight or flight, which, combined with feelings of helplessness over her general malaise with no help in sight, led to depression as well. At her lowest point, she was prone to uncontrolled crying, could not get out of bed, and lacked all energy. “Something was definitely wrong with me,” she explains. An insightful friend, who saw what she was going through, sent her a TED talk by a man named Andrew Solomon: “Depression: The Secret We Share.”

Hearing what Solomon had to say cracked open a window for Mariella and helped her to seek treatment. But it didn’t happen all at once. She kept pushing it off. “After finals,” was one of her frequent mantras. But there seemed to always be finals around the next corner. At last, in her fourth year of med school, after suffering for two years with undiagnosed and untreated anxiety and depression, she found a therapist.

Mariella recalls, “She was very helpful, and I learned a lot from therapy, but I could not implement much of what I learned because my thoughts were spiraling. Also, the physical symptoms were so severe that they only made things worse.” Her most intransigent symptoms, in addition to the heart palpitations and weight loss, were insomnia, headaches, and overactive bladder.

She and her therapist sought out a psychiatrist to prescribe medication. Mariella took a year off from school. Part of her wondered if school was the source of her anxiety and depression. But once her symptoms were under control, thanks to medication, she realized, “No! I loved med school and now I wanted more than anything to specialize in psychiatry!”

After her gap year, while being interviewed on social media, Mariella opened up about her own struggles with anxiety and depression. The interview went viral, giving Mariella a visible profile in social media and also raising awareness about these issues in a culture that prefers to deny they exist. A shocking statistic is that suicide rates in Jordan are going up but are invariably mis-reported—as an accident, for example. It is difficult to get accurate numbers as a result.

She also met a man named Yazan Halasa who had created a campaign for mental health awareness called Hareb. The word, Mariella explains, “means ‘fight,’ because we fight the stigma, we fight for awareness, and we fight the diseases.” Mariella partnered with Halasa and helped in raising awareness in schools. Mariella talked about her experience – to spread the word that it can happen to anyone and help is out there.

Because there is so little data around depression, anxiety, and suicide– people don’t seek treatment. At last, in 2017, some accurate data started to be compiled, and reports of suicide increased. The reporting shows that suicide rates in Jordan are higher than they’ve ever been—though part of that precipitous rise is the result of having some data vs. having none. before. Mariella says, “Most people in my country scoff at the notion of depression, and because of the entrenched stigma don’t get the help they need. And, in spite of recent reports of increased suicide rates, there is not a single suicide hotline in the entire country.”

When she returned to med school, part of the requirements for graduation included two months abroad to pursue her area of interest. Mariella spent her time in the United States at two programs, one month at UNC because of its first ever inpatient clinic for moms with PMADs, and one month at the Mayo Clinic where they had an outpatient program.

While in North Carolina, at the Center for Women’s Mood Disorders, she learned about new drug trials for maternal depression, and was fascinated and excited. (Coincidentally, the next year, at the PSI conference in Houston, Mariella met Chris Raines, who practices at UNC as a dual trained nurse practitioner in women’s health and psychiatry, who also happens to be vice president of the PSI board. In another coincidence, Mariella’s Jordanian therapist attended the North Carolina PSI conference back in 2014 and met Chris Raines. Small world? The interconnectedness is powerful!)

At the Mayo Clinic, Mariella heard about an upcoming two-day PSI training, taught by Birdie Meyer, former PSI board president and coordinator of the Perinatal Mood Disorders Program at Indiana University. Birdie’s training at the Mayo just happened to be that month. While taking the training, Mariella heard about PSI’s plans for PMAD certification and about the upcoming 2018 conference in Houston. She was sold. At this point she had fully decided to pursue perinatal psychiatry.

Mariella promptly signed up for the conference and the first ever certification training that was taking place that week as well.

During Mariella’s young life she has learned some key truths, through her studies, but also through her own observations and experiences. She says, “I always had a strong understanding that when you save a mom you save a family. When mother is sick, the kids get sick.” Seeing treatment programs like those at UNC and Mayo, she witnessed entire teams supporting, not just the mother, but also “the dad and the rest of the support system so that everyone was aware of what the mother was going through and helping her, supporting breastfeeding, nutrition, sleep…whatever she needed. It was powerful.”

Now, empowered by her PSI training, her commitment to perinatal mental health, and her desire to increase awareness and resources in Jordan, Mariella will be our first-ever PSI coordinator in her country. She admits that she is “very concerned by the lack of resources.” Besides Mariella herself, her former therapist is the only one in the country with training in PMADs. Clearly not enough.

Mariella wants to create a YouTube channel, a Facebook page, and upload videos for the people in her country to learn about signs and symptoms, including one about dads, all of which would provide links to resources. She envisions a time when there is a mother-baby clinic in Jordan. “I have great faith that PSI can help me raise awareness in my country. People don’t realize depression exists. They don’t know anxiety exists. And they definitely have no ability to understand what is going on if they or someone they love is suffering from a PMAD.”

Though Mariella plans to do her medical residency in the United States, she intends to manage her responsibilities as PSI coordinator throughout her training and beyond, gradually spread the word, and increase the availability of specialized treatment in Jordan for moms, dads, and families who suffer.

Mariella takes to heart something that Queen Rania of Jordan often says: “If you empower a woman, you empower a whole society.” Welcome to PSI, Mariella! 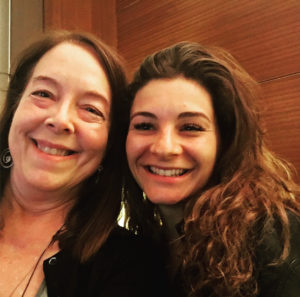