You Gotta Laugh
by Lauren Safran

On June 15th 2014, the New York Times featured a cover story on “New Findings on Timing and Range of Maternal Mental Illness.” As a coordinator with PSI, my name was given to a producer at Arise Cable News as someone to interview about the article as both a representative for PSI and as a survivor. This was exciting and frightening at the same time. Up until this point I had only shared my experience with close friends and family. I decided to do it, nine years after my second bout with PPD.

To be honest, my difficult decision was made somewhat easier because… have you heard of AriseTV? Exactly. Would anyone I knew catch wind of it? Unlikely. I was calm until I realized it would be live. Immediately I had images of falling, stuttering, or even freezing on air, a humiliating video gone viral. What actually happened wasn’t far off.

I was to be at the studio promptly at 5:30 p.m. for a 6:10 p.m. filming. No problem. I took great pains to plan and prep. I was 50 minutes north of midtown, and would leave 2 hours early, ensuring a stress free-arrival. Despite the record heat, I chose a flowy peach blouse and my dressy black pants. Extra primping ensued, and I took especially great care to tame my hair.

I grabbed my purse and some notes I had scribbled and started the car. After driving awhile, I was suddenly looking at a sea of frozen cars, I turned on the news. Five words took my breath away–“President Obama is in town.” Where, exactly? Downtown, around the corner from Arise.

I still had an hour and a half…. Surely I could make it? After 50 minutes, my mind went into crisis mode. I called Sulima, the producer, and broke the news to her. I was parked on the Henry Hudson, half a mile and a world away from Arise. She too had no knowledge of Obama’s visit. We put our heads together. None of our “solutions” would work. After a bout of self-criticism, I decided I was going to get there no matter what!

Eventually I crawled off the parkway and onto 12th street. I was ready to abandon my car and take off on foot. Then like a mirage in the desert, I spotted a parking garage! 5 very illegal maneuvers allowed me to sandwich my car into a spot. As I weighed my options my eyes caught sight of my feet— bone crippling heels! I was a goner! I flung myself over the backseat in hopes I’d find something, and there they were, like Cinderella’s glass slippers…in the form of a pair of hilarious water shoes that looked like flippers! I threw off the heels, and squeezed into my flounder flats, starting my 2 1/2 mile marathon through the crowded, humid, 96 degree streets of midtown Manhattan! Did I mention I have a perspiration issue?

I’m a runner but this speed felt bionic! Nothing was stopping me (except throngs of pedestrians). And just like that I lifted my heels towards the sky and began yelling, “Get out of my waaaaaayyyyyy!” I looked just crazy enough to scare anyone in my path.

Now I was charging; it was the running of the bulls and I was El Toro! Two and a half miles, 370 curse words, and 7 blisters later I arrived at my destination. Which brings us back to my sweating “issue.” Suffice it to say, by the time I walked into the lobby, I had transformed into the quintessential swamp creature. The underside of my hair which I took pains to defrizz, was plastered to my face, while outer tresses stuck straight out. My lovely silk blouse had dark pools of sweat and continuous droplets traveled down my forehead and neck. Through the lobby I caught a glimpse of myself and was blinded by the oily shine that was my face and black circles of mascara under my eyes. As I approached the security desk I noticed the guard staring in disbelief. As I opened my mouth to announce myself all that came out was a guttural sounding, “Suleeeeeeema.” With one hand on the panic button she pointed toward the elevators.

As I exited the elevators at the 10th floor I observed curious people quickly turning away, as one might turn from a car crash. Sulima whisked me into the makeup room, plopped me into a seat and strategically aimed 5 fans at my sweatiest areas. I had an audience with the makeup artist and other concerned staff. How would I garner the confidence to share my personal experience? If I could only dry off in time!

While in my catatonic state, a square mic box was threaded under my sweaty clothes and clipped to the back of my pants. This was happening, I was going on, whether I liked it or not. And just then the urge to urinate became so strong I knew I wouldn’t make it. “Two minutes” someone called out.”

“I have to use the restroom!” I implored. I could sense the profanities the assistant was thinking as I was peeled from the chair and rushed to the bathroom. If anyone has ever tried to quickly yank down a wet pair of pants, they’d know it’s not easy. But after a struggle the pants were down and I heard a “plop” … it was the microphone, now floating in the toilet below me.

“Mrs. Safran, you have to come out now, you’re on!!” To hell with my germaphobia! I took a deep breath and stuck my hand into that bowl and pulled the microphone out. I clipped it right back on and was marched to my seat in the studio! The interviewer took one look at me and called to the head cameraman, “Can you take the pile of tissues she’s holding?!” I was clinging to a box worth of balled up tissues for dabbing and blotting and wiping. “Do you really have to take this?” (The cameraman pulled it out of my tightly clenched fists and a millisecond later the intro music played.

Though it seemed impossible that I could manage to make sense (I avoided the news clip for a week) I managed to look and sound human. Besides a twitch in response to droplets of sweat dripping into my eyes, my “condition” wasn’t that noticeable on film.

It wasn’t my finest moment, but becoming a mom, a mom who experienced PPD twice, has afforded me insight about life experiences. I learned the ability to laugh at myself, to expect the unexpected, and to know that moments like these are just that, moments. The show must go on…so don’t sweat the small stuff! 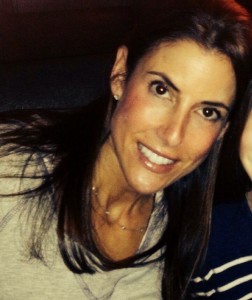 Pregnancy and new parenthood are life changing events which, even in the best of circumstances, can be challenging. When accompanied by significant mood changes, it can feel insurmountable. New moms often feel societal pressure to conform to the “fairy tale” image of motherhood. Psychotherapist Lauren Safran doesn’t want these pressures to keep women from speaking up about their difficulties. Lauren specializes in the treatment of reproductive mood disorders with practices in both Harrison and Chappaqua, NY. She received her master’s degree in Social Work from Columbia University and has since been providing support to women on their journeys through motherhood. She has made it her mission to support women during this difficult time, and wants them to know that they are not alone, they didn’t cause this, and with good treatment they will recover. For the past 9 years Lauren has been a New York State Coordinator for PSI. She is a consultant for Pre-Conceive, a company that provides classes and information about maternal health. She is also a member of Hudson Valley Birth Network and speaks to both community and professional groups. Lauren provides women with the tools to realize their own strengths and capabilities and emphasizes that caring for oneself is vital to caring for a child.